Recent article on Buzzfeed, where the founding editor Craig Silverman and the contributor Lawrence Alexander revealed that a group of young Macedonian citizens generate and spread fake news about Trump, was almost a full day on their main page. Buzzfeed, as you may know, is one of the most visited websites in the world. Shortly after this, another article followed and it continued the story about the borderless e-profiteers with the following title: “How Macedonian Spammers Are Using Facebook Groups To Feed You Fake News”. 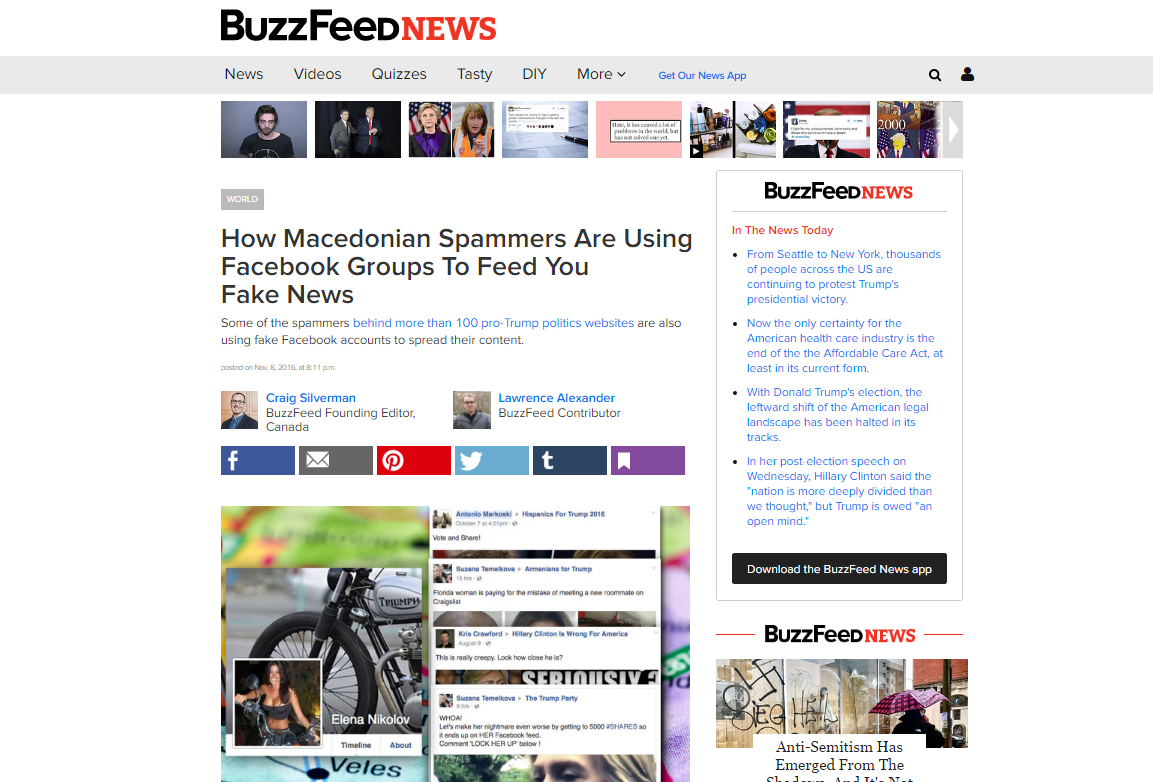 If you’re still confused by the whole affair, maybe some explaining is warranted. The thing is, sources have been telling us these past years that a group of Macedonians, mostly with residence in Veles, Skopje and Kumanovo, are publishing articles on topic-related websites, such as cars, politics, healthy diet, sport and so on. By doing so, they are taking advantage of programs such as AdSense to generate income from ads. But you can’t generate income without generating buzz first and so they start attracting visitors on every way possible: Facebook adds, fake Facebook profiles, posting on numerous groups, paying for re-posting or sharing links on pages that already have a lot of likes, you name it! The whole concept would be acceptable if the news is actual news and not just clickbait, a tool used for spamming and gaining visitors just for the sake of the adds. In the race for profit – time is money!

How do they earn money?

Google and their platform AdSense pay for every single click on the ads visible on the website. As for the amount of money per click, that depends on who’s clicking and what’s done after the add has been clicked. The quickest way to earn money is by targeting American citizens since a large percentage of them are used to clicking adds like this. To that end, it also helps that most of the ads are from American companies. So, the point of the whole race, the endgame is to get more clicks. How? Who cares how? At the end of the month, Google and other networks will transfer funds to the site owner and that’s all to it. In the past, checks were sent but things are a lot easier now.

According to our sources, some e-profiteers gain a lot from this scheme, even thousands of dollars per month. Some of them are reinvesting part of the money, while some end up losing more money. It is a risky enterprise and one needs to be careful, lucky and be prepared to show an effort and consistency. At the beginning, the new entrepreneurs usually pay to be part of the scheme and have their links shared by groups that already have a lot of likes and followers.

In an article by Guardian, a Macedonian that, for the sake of anonymity, decided to go by the name of “Alex”, claims that he was one of the first who started publishing posts about USA politics. His website was later on copied from his neighbors who wanted to capitalized on the Trump wave. According to Alex, his website had 1 million visits on a monthly basis, half of those were on his Facebook page.

“We are an independent news magazine with [our] primary goal to influence American policy, especially politics,” says Alex, who originally favored Ted Cruz in the Republican primaries. “Then my city fellows saw what I was doing and started to copy my work. They are just looking to earn money from ad networks.”

In the same article, he admits that, at first, he was copy-pasting news from legitimate American websites but later on decided to hire people to write stories from him.

It’s ludicrous to even try to believe that these people are running legitimate websites, even though some of them are spending more than 8 hours a day on projects like this. We know, because most of the 300 websites that we came across, are part of the same scheme. It all boils down to implementing a template with no personal adjustments or information on who’s behind the website, copy-pasting content (some even translate stolen Macedonian articles into English) and spamming the hell out of them on social media, whether that be in groups, vie ads, other pages, private or false profiles, sky is the limit! You’d be surprised to know that most of these FB pages didn’t start as such. At first, they were support groups of some sort, asking or expressing support for a noble goal but the moment they got ton of members they simply changed the name of the group and started spamming their members/ followers with clickbait content. This goes even further, with offers to buy out pages or groups that have a lot of likes. Such was the case in one article by Daily Dot, titled “How spammers almost destroyed the greatest Simpsons meme FB page”. In it, there are screenshots of private messages where certain Aleksandar R. and Valentina D. are offering the administrator money to buy out the group. 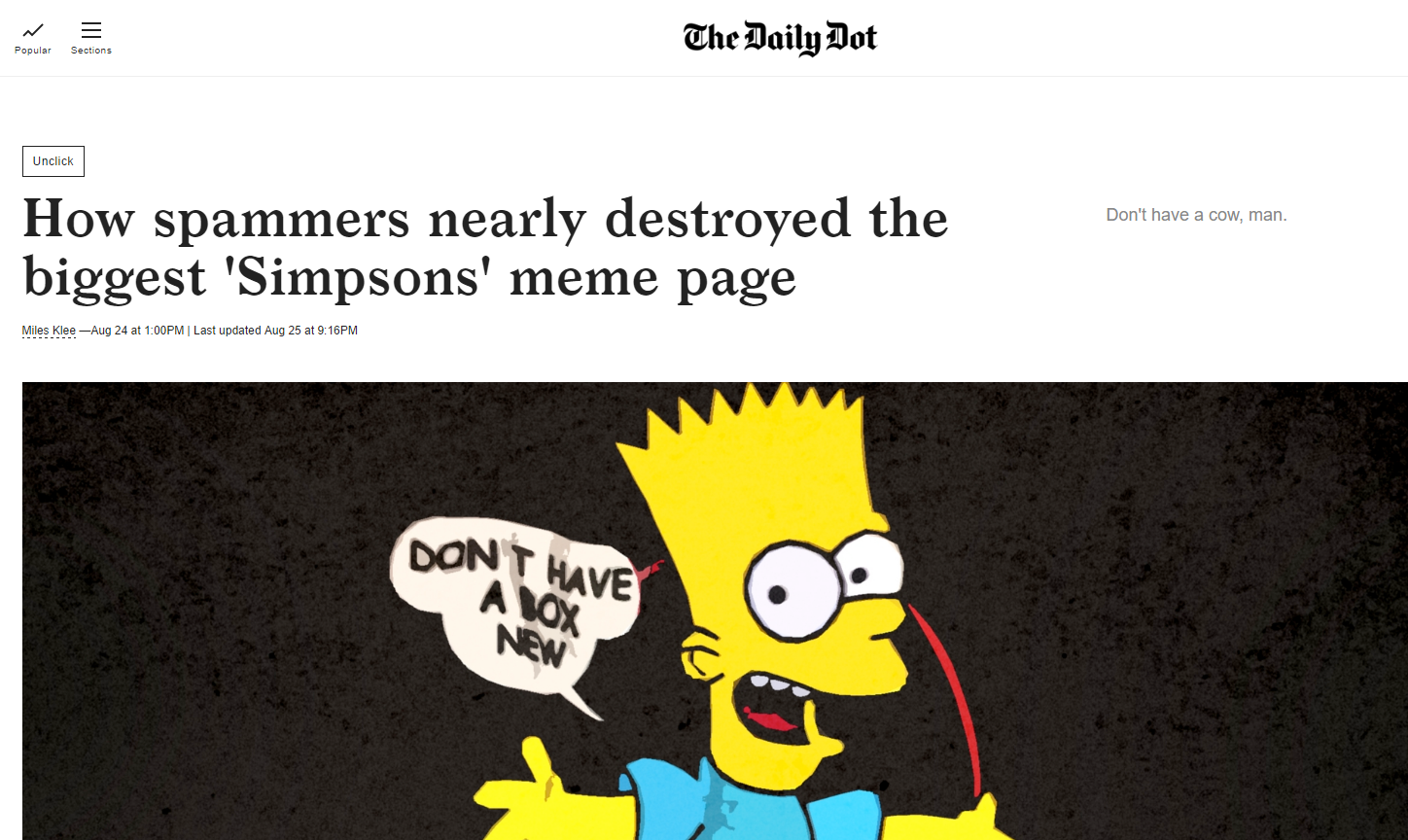 Another research, which was done by Buzzfeed, confirms that some of the authors behind the hundreds of sites that they discovered on the Trump topic use fake profiles to distribute content.

“These exploiters will use anything to make money,” said Sarah Thompson, a mother of four who home schools her kids on a farm in Indiana. After noticing suspicious posts being shared in Facebook groups about horses, she too began investigating their origin and ended up discovering hundreds of fake Facebook profiles that were promoting websites run by people in that same Macedonian town. “The story is not the election,” she said. “It’s how Facebook is being played.”

Those that have been playing the whole internet advertisements game for a while know that there’s nothing new about this and it’s just one of the many tactics that have been used throughout the years. How many times has it occurred to you to get an email asking for a ridiculously small chunk of money in order to get millions of dollars in inheritance. Well, if that honor goes to Nigeria, it would seem that the spamming market over Facebook is currently on Macedonian shoulders, though to be completely fair, Macedonians are neither the first not the last to milk this thing.

Real contribution towards the improvement of the Internet

After Buzzfeed published the whole story and the rest of the media jumped on the same bandwagon, Facebook had no choice but to investigate the issue further, since it is in its own interest to offer its users news feed content of the highest possible quality. That’s hardly happening if Macedonian e-profiteers are spamming the news feed with fake news. To no one’s surprise, TechCrunch also decided to mention Macedonia in their article: “Facebook admits it must do more to stop the spread of misinformation on its platform”. TechCrunch contacted Facebook and, among other things, asked the following question:

Does Facebook have a specific response to Buzzfeed’s investigation of websites in Macedonia being used to generate large numbers of fake news stories that were placed into the Newsfeed?

“We take misinformation on Facebook very seriously. We value authentic communication, and hear consistently from those who use Facebook that they prefer not to see misinformation. In Newsfeed we use various signals based on community feedback to determine which posts are likely to contain inaccurate information, and reduce their distribution. In Trending we look at a variety of signals to help make sure the topics being shown are reflective of real-world events, and take additional steps to prevent false or misleading content from appearing. Despite these efforts we understand there’s so much more we need to do, and that is why it’s important that we keep improving our ability to detect misinformation. We’re committed to continuing to work on this issue and improve the experiences on our platform “.

Even the American New York Magazine can’t help but ask the question: “Can Facebook Solve Its Macedonian Fake-News Problem?” 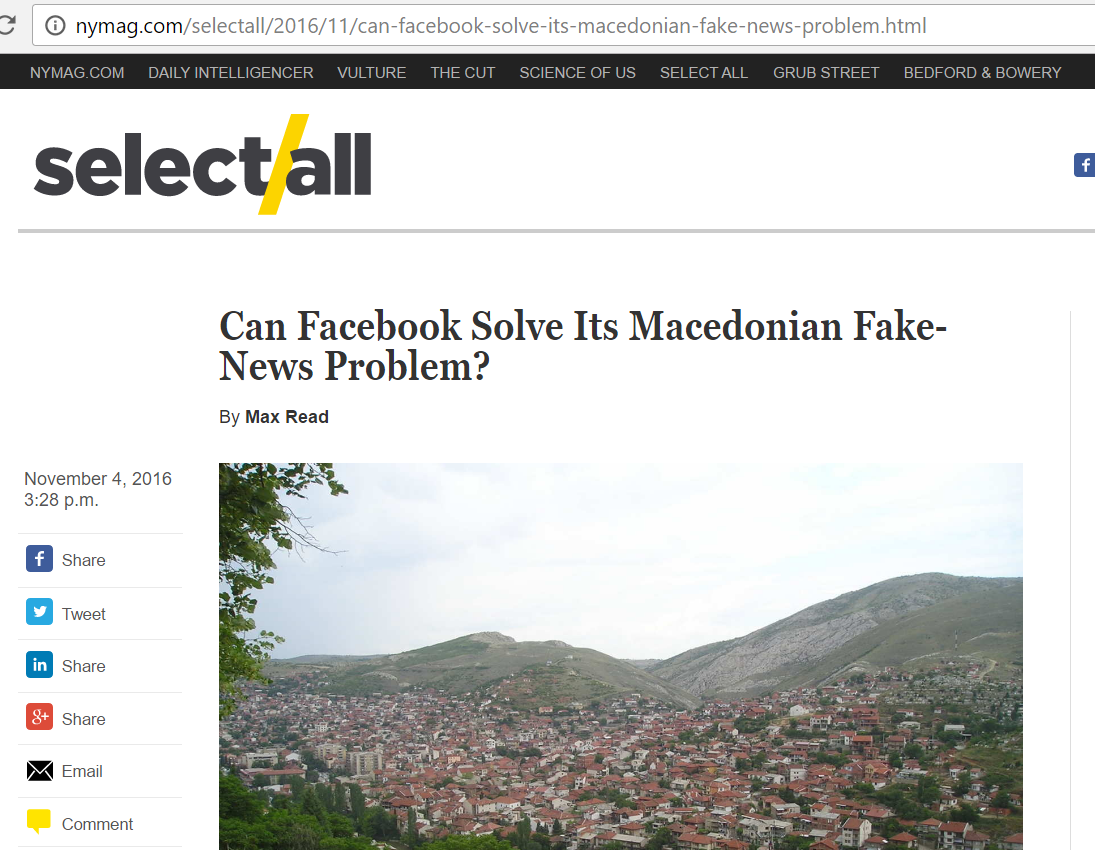 We sincerely hope that this spamming practice will better the global algorithm and contribute towards better Facebook news-feed content, even if they put Macedonia in a really bad place, right next to the rest of the global spamming groups. And if tomorrow brings better content on your Facebook news-feed, well, you then know who to thank. You go Macedonia!