Two successful Macedonian campaigns ended up on Kickstarter. After the crowdfunding process ended, it became more difficult to be kept in the loop and the backers know little of what is actually happening behind closed doors. So, wanting to hear the story of what is happening at the very end of a Kickstarter campaign, we decided to have a little chat with Milan Tasevski, the founder of Archona Games; as well as the fine group behind Final Frontier Games whose names are Ivana and Vojkan Krstevski, Toni Toshevski and Maja Matovska.

Both campaigns walked a similar road and, more importantly, and to the satisfaction of the backers, the end-result was delivered on time. Even better, Archona Games and Final Frontier Games are already working on future projects!

Small Star Empires is the first successful Kickstarted project whose roots are in Macedonia. The whole campaign managed to be funded with 33.000 Australian dollars from 674 backers; additional 10.522 Australian dollars were pledged with the completion of the goal from Spieleschmiede campaign. Cavern Tavern, a game by Final Frontier Games, managed to have backers pledge 107.000 dollars and be proclaimed as one of the top ten Kickstarter games in 2016.

What happens after a crowdfunding campaign ends? What are some of the challenges that you might have faced, whether that be the withdrawal of funds or manufacturing the product?

At the end of a campaign, we reach a point when we need to start manufacturing, which means if a careful planning is done at the same time as the crowdfunding process then you would be all set to start with the manufacturing process (design, graphics etc). Some of the companies take their time to further develop their product but it is my personal belief that 99% of the design needs should be fulfilled long before the campaign starts. And it’d be wrong to assume there are no challenges when the campaign finally kicks in. It’s a period where you continue monitoring and marketing your product so that you generate enough interest and encourage future backers. For example, this year, and for the first time as developers, we visited the Essen Spiel game fair and managed to show and sell a decent number of copies of our game to the visitors.

I would say there are three phases in each and every crowdfunding campaign. Coming up with the idea for the product, launching the campaign and manufacturing and distributing the product. In the beginning, we though that the hardest part would be to come up with a product that will be supported and backed by the gaming community. But now, when we’re done with the whole process, we can safely say that each of these phases has a unique set of challenges, from how an idea turns into crowdfunding, then manufacturing and, finally, distribution. The most difficult aspect might be funding the product itself but even that challenge is well balanced because we have complete control of the process and we are allowed to work on the development for as long as we want or until we feel that the time has come for the actual product to launch.

The second phase, the one where the whole crowdfunding is happening, would probably be the most intense part of the whole process. Thousands upon thousands of people are drawn to the product, they are mulling over it, dissecting and analyzing its strengths and weaknesses, as well as they should; they are paying with their hard-earned cash for something that is a year away from actually being delivered. To make matters worse, Kickstarter is swarmed with hundreds of similar social games that are fighting to be under the same spotlight. Those 30 days are extremely crucial, as you need to be online 24/7, have an answer pocketed for each and every question and impress upon the potential backers that there is not a thing about the gaming industry that you don’t know about and that you are willing to be part of the excitement and enthusiasm which will result in the deliverance of the promised product. Usually, the Kickstarter campaigns are 30 days long but, due to the stress that’s involved in this phase, we see more and more developers that are implementing a shorter time span and try to form their campaigns within a 20-day time frame.

The third phase, which is manufacturing and distribution, can be equally troublesome. The Cavern Tavern campaign was large in scope, both in terms of backers as well as the number of components necessary for the game itself. The game, with its 250 components, was to be delivered to more than 2000 people all around the world. Because of this, we not only had to coordinate the manufacturing process in China, but we also had to commit resources to fulfillment centers on four continents (China, USA, United Kingdom and Australia) whose job was to re-ship the game to the home addresses of the backers. This meant we had to become knowledgeable in everything that had to do with customs, various taxes that came into play and a lot more. Then, when everything is said and done, things escalate further; the game is shipped, the backers have it and all we could do on our end is wait and sift through the comments and reviews for the game and the quality of the components. Fortunately, this past month has been filled with positive reactions and we are already being ask about what’s next on the agenda.

Was creating the crowdfunding campaign and shipping games from Macedonia met with region-specific challenges?

There is no shortages of problems. That goes double for us since this was our first project. However, it must be pointed out that the gaming community for board games is the best community in the world. We found out that being part of many associations and gatherings can be extremely productive and due to an abundance of advice from other developers and publishers we didn’t actually face that many obstacles. Though, to be fair, there were events that were simply out of our control. For example, we promised that the game will be shipped from inside the EU so that the EU backers could avoid paying additional taxes. That challenge was met by signing an agreement with a company in England, whose sole responsibility was to receive our shipment and redistribute the games to the backers throughout the EU. As soon as we signed the agreement, however, Great Britain was to leave EU. If this were to happen now, we would’ve faced thousands of dollars of additional expenses. Another unforeseen problem would have been with Trump and his promises to impose taxes on every product that would be shipped from China to the USA. At that time, there was no way we could even remotely be aware that complications of this magnitude might actually happen. It just goes to show that whether you planed or not, unpredictable things are bound to happen and we should strive to be prepared for anything future might throw our way.

Kickstarter rules and regulations do not allow running campaigns from Macedonia. But where there’s a way, there’s a will and you could easily bypass this by having a, say, relative from another country create the account or even start a company in a different country. Unfortunately, Macedonia is one of those countries that are way behind opportunities such as these and you would have to think outside the box and, most importantly, improvise to be ahead of the other internet economy players. While on the same note, we have to add that we neither shipped the game from Macedonia nor we would recommend that enterprise to anyone. There are many ways of delivering the final product and we decided to ship the game to four continents and, from there, redistribute it to the home addresses, which proved to be the most cost-effective option.

We had almost no problems at all. The Small Star Empires manufacturing process was as planned and all deadlines were met with time to spare. However, we didn’t ship the games from Macedonia, but from our fulfillment center in Germany, which was the base of operation and point of origin for all our shipped games.

Were you able to ship the games on time?

Yes, even sooner than expected. People were ecstatic, not only because of the fast shipment but also because of the way the whole campaign was handled as well as the quality of the game.

The games were shipped a whole month before the actual date of delivery. This made all our backers extremely satisfied and did wonders with our reputation, mostly because it seldom happens for a company to deliver its product ahead of time. This just goes to show what happens when one does all the necessary planning well before Kickstarter campaign kicks in and also how complete dedication can bear wondrous fruits.

What are your plans for the future?

We’re not done with Cavern Tavern and we are expanding the world. To that end, we published an e-book Cavern Tavern – The Secret of The Five Realms. Based on our game, we are setting our eye on worldbuilding and if you want to find out more, please visit our website finalfrontiergames.com. With this book, we are actually paving the road for our next game – Rise to Nobility, the continuation of the Cavern Tavern saga, which, coincidentally, is being promoted these days, with plans for a Kickstarter campaign come March or April. 2017 will bring preparations for a new Cavern Tavern expansion as well as the third game in The Five Realms series.  We are also in talks for developing a mobile version for the game. All of this, we hope, will mark 2017 as a year with even more successful projects than Cavern Tavern. It goes without saying that our valuable asset continues to be The Micho, whose contribution goes way beyond the illustrations for the games, as he continues to play crucial role in further developing the worlds. 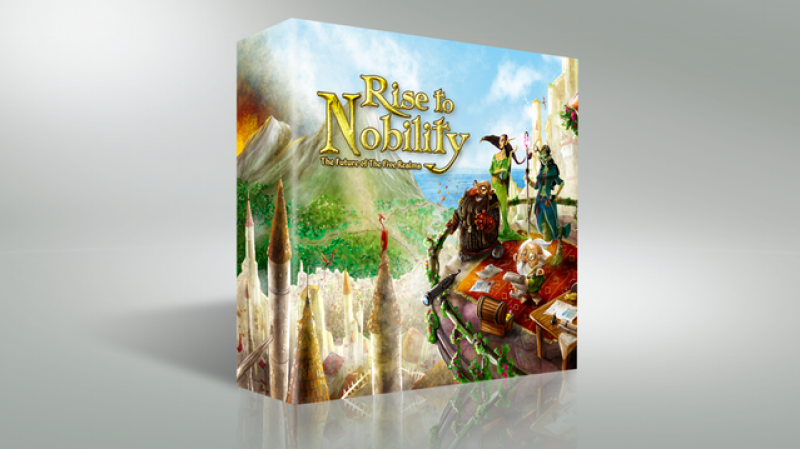 We are working on several new titles, not excluding the first expansion for Small Star Empires. We’ll make sure to keep you in the loop as soon as we are ready to share something with the world!